The first news of 3D printed ventilation apparatus came from Spain (apart from the case of 3D printing of valves at an Italian hospital). Here, we are talking about the so-called Ambu bags — temporary manual ventilators usually applied in the field by, paramedics. A whole consortium was involved in the development of the 3D printed version with the mechanical drive mechanism. The Leitat Technology Center in Barcelona played the leading role; support was provided by the Catalan Health Service, Barcelona's Zona Franca industrial estate, Hewlett Packard Enterprise, and the Parc Taulí Hospital in Sabadell, which houses the Faculty of Medicine of the Autonomous University of Barcelona. 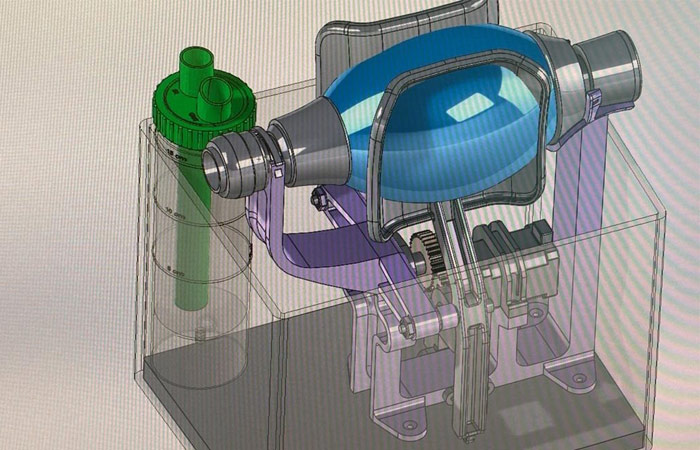 Leitat's senior engineer, Magí Galindo, is responsible for the design, and the validation tests were held by Dr. Lluís Blanch, Director of Innovation at the Parc Taulí Hospital. According to the results, it was decided to immediately start production along with the parallel development of an improved version. All the work was carried out in accordance with the recommendations of the national regulator — the Spanish Agency of Medicines and Medical Devices. The Airbus aerospace corporation and the Navantia Spanish shipbuilding company, having the necessary additive equipment including industrial 3D printers, volunteered to help with the production. The additive capacities are enough for 3D printing of 50–100 field respirators per day.

Urbicum is a Polish company engaged in the production of FDM 3D printers. However, it went further and launched the VentilAid open source project to create a fully-fledged but very simple (in terms of the structure) mechanical ventilator with extensive use of 3D printed parts.

The company's engineers have already shown a working prototype of the electrically driven device. The developers take into account a variety of points: like standard, certified equipment, the project provides for the possibility of adjusting the humidity of the incoming air, filtering the air at the inlet and outlet, synchronizing with the patient’s breathing and controlling the pressure to prevent lung barotrauma. The production of 3D printed prototype parts took about fifteen hours. The pilot system uses homemade components from PLA, ABS, and thermoplastic polyurethane — and factory parts such as the drive and the pneumatic limit switch.

The project was opened under a non-commercial license, but has not yet passed full-fledged clinical trials, and therefore is proposed as a last resort measure. The authors invite engineers, doctors, and medical technicians to collaborate and improve the system. An improved, standalone version is being worked at, and up-to-date information is published on the official website of the project.

While Spanish engineers are working on manual ventilators, and the Polish on automated ones, their American colleagues are engaged in creating a transitional option. Researchers at the Massachusetts Institute of Technology (MIT) offer a solution in case there are no Ambu bag shortage problems, but mechanical ventilation systems are urgently needed. That is, the idea is to remake the manual device into a more or less autonomous ventilator. The development began long before the pandemic: in 2010, university students presented a project of remaking the Ambu bag into a portable ventilator, but ended up creating a prototype. Now the institute is urgently finalizing the project to at least meet the minimum safety requirements. The developers focus on caution, since the device is inferior to certified apparatus in terms of efficiency, reliability, and safety, and therefore can only be used in clinical conditions, under the supervision of specialists and in case of emergency. All accomplishments concerning this project will be posted on the official website. The existing results have already been submitted to the U.S. Food and Drug Administration (FDA) for permission to use the makeshift equipment in exceptional circumstances.
Tags: 3d printingcoronavirusmedicine
Hubs: Top 3D Shop corporate blog 3D printers
0
0