For me, these two models are quite similar, but in fact they don’t have obvious characteristics to measure this similarity. These models have different numbers of vertices, edges and polygons. They are of different sizes, rotated differently and both have the same transforms (Location = [0,0,0], Rotation in radians = [0,0,0], Scale = [1,1,1]). So how to determine their similarity?

If these models were equally oriented in space, they could be scaled to the common size of Bounding Box, then move the origin of local coordinates to its center, convert models to voxel representation and compare the lists of voxels. 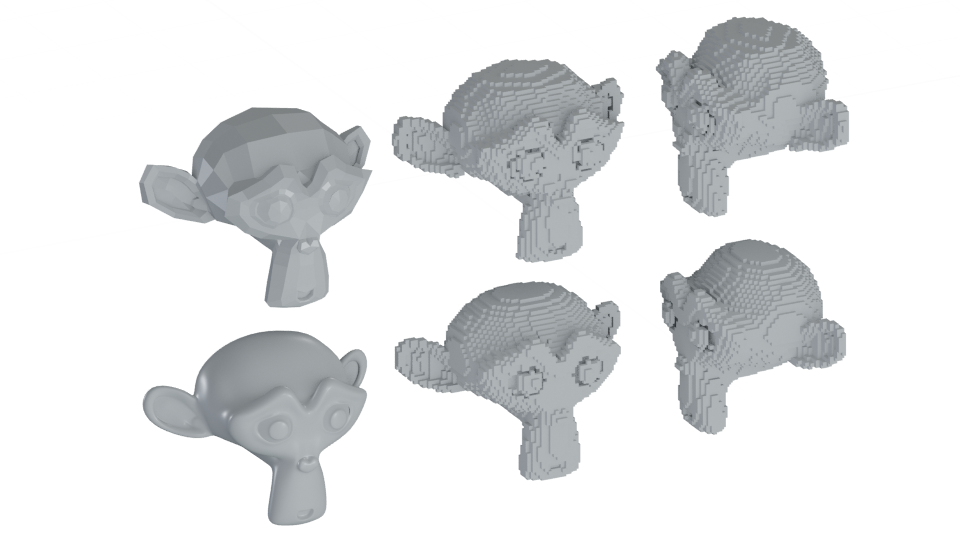 Monkeys and their voxels.

If these models were arbitrarily oriented along the coordinate axes, they could be scaled to the common size of Bounding Box, then move the origin of local coordinates to its center, render them from six sides and compare sets of images among themselves.

In order to achieve rotation invariance, I decided to turn to a spherical coordinate system.

First, I calculated the distances to the voxels from the origin, collected the distances in ordered lists and compared these lists. This yielded good results, but it took a long time to convert models to voxel representation of enough resolution and to compare large lists.

Instead of voxelization and rendering, my method is based on Ray Casting. The model is placed inside the icosahedral spherical polyhedron, rays are casted from its polygons towards the model surface and their lengths are collected in lists.
Lists of these lengths are sorted and compared with each other. Sorting eliminates rotation, since for the same or close in geometry models rays lengths will coincide within the margin of error, but differ in order. Before comparing 3D models (hereinafter referred to as objects), each one goes through the preparation phase (I implemented this part on Python in Blender):


When all the objects got their lists of rays lengths they can be compared (I wrote this part on Rust):

The algorithm works great for finding objects close in geometry, for example, high- and low-polygon variants of the same model, sometimes it copes well with objects that are similar in meaning, for example, with teapots or guitars of various shapes. However, since the number of models to which the same list of rays lengths will correspond can be approximately estimated at

, there is a significant probability that objects visually dissimilar in geometry will have a score of coincidence in the range 0.5 — 0.9. During the tests, such things happened with bananas, which coincided with airplanes and people in different poses by 0.7, which in turn coincided with tigers and dogs by “impressive” 0.85.

To refine search should take into account the size and / or rotation of objects.

Pyhton code for creating dictionaries of opposite polygons of icospheres in Blender.
Python code for batch preparation of objects and calculating the lists of rays lengths in Blender.
Rust code for lists comparison.