Working with speech recognition models we often encounter misconceptions among potential customers and users (mostly related to the fact that people have a hard time distinguishing substance over form). People also tend to believe that punctuation marks and spaces are somehow obviously present in spoken speech, when in fact real spoken speech and written speech are entirely different beasts.

Of course you can just start each sentence with a capital letter and put a full stop at the end. But it is preferable to have some relatively simple and universal solution for "restoring" punctuation marks and capital letters in sentences that our speech recognition system generates. And it would be really nice if such a system worked with any texts in general.

To reiterate — the purpose of such a system is only to improve the readability of the text. It does not add information to the text that did not originally exist.

The problem and the solution

Let's assume that the input is a sentence in lowercase letters without any punctuation, i.e. similar to the outputs of any speech recognition systems. We ideally need a model that makes texts proper, i.e. restores capital letters and punctuation marks. A set of punctuation marks .,—!?- was chosen based on characters most used on average.

Also we embraced the assumption that the model should insert only one symbol after each token (a punctuation mark or a space). This automatically rules out complex punctuation cases (i.e. direct speech). This is an intentional simplification, because the main task is to improve readability as opposed to achieving grammatically ideal text.

The solution had to be universal enough to support several key languages. By design we can easily extend our system to an arbitrary number of languages should need arise.

Initially we envisaged the solution to be small BERT-like model with some classifiers on top. We used internal text corpora for training.

We acquainted ourselves with a solution of a similar problem from here. However, for our purposes we needed:

As a result, our solution mostly depends only on PyTorch.

Looking for the backbone model

We wanted to use as small pretrained language model as possible. However, a quick search through the list of pretrained models on https://huggingface.co/ did not give inspiring results. In fact there is only one multi-language decently sized model available, which still weighs about 500 megabytes.

After extensive experiments we eventually settled on the simplest possible architecture, and the final weight of the model was still 520 megabytes.

So we tried to compress the model. The simplest option is of course quantization (particularly a combination of static and dynamic as described here).

As a result, the model was compressed to around 130 megabytes without significant loss of quality. Also we reduced the redundant vocabulary by throwing out tokens for non-used languages. This allowed us to compress the embedding from 120,000 tokens to 75,000 tokens.

Provided that at that moment the model was smaller than 100 megabytes, we decided against investing time in more sophisticated compression techniques (i.e. dropping less used tokens or model factorization). All of the metrics below are calculated with this small quantized model.

Contrary to the popular trends we aim to provide as detailed, informative and honest metrics as possible. In this particular case, we used the following datasets for validation:

We use the following metrics:

For the correct and informative metrics calculation, the following transformations were applied to the texts beforehand:

WER_p / WER_c are specified in the cells below. The baseline metrics are calculated for a naive algorithm that starts the sentence with a capital letter and ends it with a full stop.

As one can see from the spreadsheets — even for Russian, the hyphen values remained empty, because the model suggested not to put it down at all on the data used for calculating metrics, or to replace the hyphen with some other symbol (as can be seen in the matrices below); seems that it's placed better in case of sentence in the form of definition (see the example at the end of the article).

For reference here are some available F1 metrics for different solutions of similar tasks — for different languages, on different validation datasets. It's not possible to compare them directly, but they can serve as a first order approximations of metrics reported for overfit academic models. The classes in such models are also usually different and more simplified — COMMA, PERIOD, QUESTION: 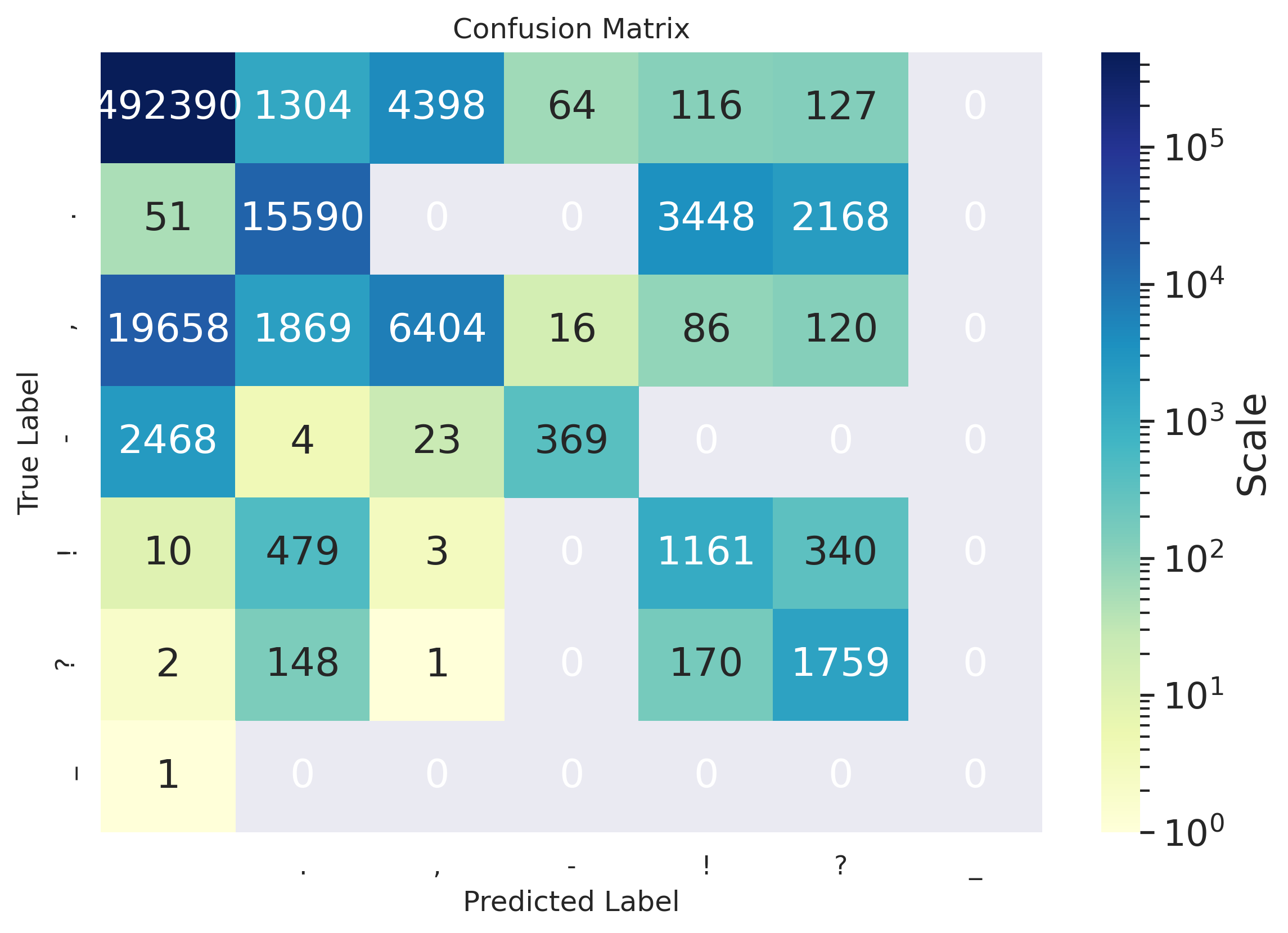 How to run it

The model is published in the repository silero-models. And here is a simple snippet for model usage (more detailed examples can be found in colab):

We had to put a full stop somewhere (pun intended), so the following ideas were left for future work: