Robotics History of IT
This post is a continuation of the first, the second, the third, and the fourth parts of the real story of Android Robotics describing the field from the beginning up to 2019.

Robotics today shares some similarities to personal computing of late 70s to early 80s. It is a field of experimentation, new projects, and lots of hopes, and like with early personal computing, it is a field of private endeavours and hobby, «hacker», projects. After all, creating is about being «just for fun». Androids are no exception, although, they are present in a much lesser amount compared to other kinds of robots due to high prices of constructing a full-sized humanoid robot, and even higher prices of making this humanoid robot human-like. It is quite difficult to work with silicone to create an animated face, and only those willing to spend time and money successfully build something.

Japanese robotics scene is thriving, partially because of an easy access to components, shops, and events to gather at, and quite a lot of people who built humanoind robots of standard «battle» size (60 cm.) had made them more human-like or doll-like. One of the most known examples would be Rozenzebet's dolls.

One of the projects that followed was Somari (ソマリ), which since disappeared from the scene www.youtube.com/watch?v=Yc1wfftP7m4, but out of projects in development, another project worthy of mention would be dolls by med_mahiro, ST-01 and HRP-4C looking ST-00. (Here's a link to an original video in Twitter).

Still, it would be more appropriate to specify an android to being roughly human-size, and this, due to difficulties mentioned above, would limit the list.

One of the first hobby android projects that attracted a bit of media attention was Aiko made by Le Trung in Canada in around 2007. Initially based on one of the Orient Industries love doll faces the project got quite complex software-wise, but was eventually halted as funds ran out.

At the hobby scene in Japan small projects of large scale android-esque robots appeared at around 2008-2010, with Maidroid (メイドロイド), Alice (アリス) (video from Robot Watch), Doka Harumi (ドカはるみ), and Shiruka (識樺), being some better examples. There also were curious examples such as Yuria (ユリア) which was constructed to be a sex robot (not present on a video). All of these robots too, disappeared after a while, which is a bit of a shame, especially with Shiruka.

Again, at the same time, Nicom Lai from Hong Kong had experimented by creating a number of simple androids, finishing with creating Goldenebb in around 2012. He planned to commercialise his creations by opening Human-Robot Technology Co., but the lack of interest likely halted the endeavour.

Another small project appeared in Chinese news in 2015, it was a «robot mannequin» built by Li Zuchen from Changchun in Jilin Province after his retirement. A thing worthy of note is that the articles mentioned that the cost for construction was $23500 and eight years of work.

Back in Japan, in 2009, missile_39 had constructed an android model of Hatsune Miku, and since then, in 2017 he had constructed a second version of Hatsune Miku android. Both robots toured different hobby exhibitions, and the second one even was exhibited at Robodex. Since then he successfully finished a crowdfunding campaign to build a third robot.

Hatsune Miku seems to be a popular topic for android building, there was another full-size project by an anonymous, publishing under Youtube name Mechaism. Unfortunately, his channel went offline, and no info is where the project went.

In around 2014, Japanese mecha-constructing hobbyist King Kizer had made a simple doll-like human-sized robot Moe, which only appeared at one public event and was not even recorded on video, but since 2017 he re-launched the project, creating a new Moe. There have not been any publicity since the initial videos, but the project might be worked upon in private.

Probably the most famous of all the projects would be 2017-released Mark 1 by Hong Kong creator Ricky Ma. He had built androids before, even attempted to collaborate with Le Trung on creating Aiko 2, and then got his first fame by creating a robot copy of an actress Kelly Chen, but his latest robot is indeed very impressive hardware-wise and aesthetic-wise. He utilised 3D printing for inner structure, and had plans for releasing the 3D models as part of the book on android construction for hobbyists. For now, as the crowdfunding for the book had failed the models are still private. Mark 1 travelled to multiple media events, even appeared on Russian Channel 1 (which he agrees, is not a good place; but hey, free travel is always nice). He continues to develop Mark 1, posting updates on Facebook and Instagram.

One of the most recent projects, beginning in 2017 in Japan, and with an interesting concept is MASIRO by A_Say. The robot is developed to be a dance or walk partner with the first part finished being the wheel base. MASIRO appeared at hobby exhibitions and continues to be in development, with occasional updates on Twitter.

The story of android robotics of modern era in our story begun with Disney's audio-animatronics, and it is worthy to return to note what happened with androids as part of animatronics in the 21st century. It will be impossible to mention all the human-like figures, and all the companies, at US International Association of Amusement Parks and Attractions (IAPPA) exhibitions alone there can be dozens of different animatronic businesses showing their latest robots. There are companies outside of US in dozens, such as R2R Engineering which built a giant android-esque robot for a science museum in Amsterdam. Here's just a random nice example from 2004 of a robot by US Sally Corporation.

One of the most curious developments of a past few years was introduction of Mesmer technology by a UK company Engineered Arts in 2018. Engineered Arts is the company behind Thespian, a humanoid «actor» robot which spread around the world, and which often is exploited by the owners that attempt to pose teleoperation for real autonomous action. Mesmer is fully autonomous not only in a sense, that like other animatronics, they perform a pre-recorded routine, Mesmer is based with capabilities of modifying the routine based upon the data gathered in the surrounding.

Disney, with whom the story begun have not stalled behind, they continue to do research in robotics and mechatronics, and remain innovators. Sometimes, the innovations are questionable, such as some recent animatronics having a projected face instead of a «real» one, which might be cheaper to produce, but slightly breaks the immersion. Disney is secretive about their backstage, but not fully secretive, and even before opening in 2013 their new Little Mermaid ride they published this video.

The last video of this long story will also be from Disney, and it will also be a backstage video, this time, of a project they develop in time for 2020 Olympics in Tokyo. The media might have a tendency to drop the almost-obligatory «first realistic robot» description that was present when reporting on new projects, but as this video shows, the journey for better tech is never ending, and android robotics continues to evolve.

So, with this concludes the journey into android robotics. To add a bit TL:DR, android robotics, despite the small size compared to other fields and controversial nature with comments on the lack of necessity of androids coming from both from geeks and from ordinary people, the industry that begun, depending on how you count, in ancient times, in 1964 or in early 2000s, has no tendency to slow down.

Android robotics proves quite useful in academia for research in human-robot interaction, artificial intellegence, teleoperation, and other stuff covered by android science. Just constructing an android is a good task for laboratories that might result in quite a bit of knowledge and papers written. Android robotics is useful in medical simulation field. Androids prove themselves useful for jobs where you need human appearance but might not necessarily need human cognition, in entertainment, in theatre and arts, in recreating historical figures, in service, and currently, as androids are not yet common place, androids attract attention and are good for publicity. Androids can be companion robots, and as everything in robotics, «just for fun» applies in android robotics too.

Unfortunately, i can't give many links for further reads. For early, pre 21th century electro-mechanical robots Cyberneticzoo might be a good source. Hiroshi Ishiguro Laboratories have a website and Facebook. Big news of androids in English usually gets published on IEEE Spectrum, and androids occasionally appear in their collections of Friday videos each week. In Japanese, androids often appear on Robostart. New androids also tend to appear on the youtube channels of Kazumichi Moriyama and Robostart and much more often than anything new gets published on my Youtube archive.

For a bit of self-promotion i'll throw a link to https://ko-fi.com/vokabre and https://www.patreon.com/vokabre, where sometimes android-related art might appear as well.

As it turns out, it was indeed a long read, but hopefully it was a fun and informative one. 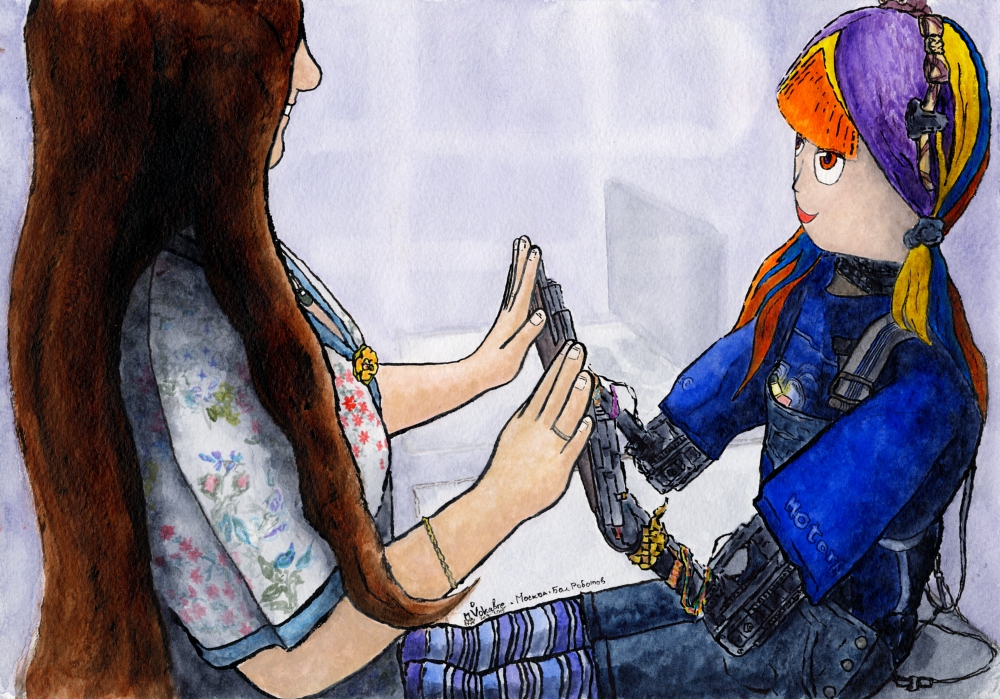