Top 10 Programming Language You Must Know

Are you looking for the top programming languages?

If yes, then your search ends here. If you are aspiring to become a programmer, then you must know some programming languages to stay ahead of the competition.

So, here I have listed the top 10 Programming Languages you must know for future perspective.

Here are the Most Popular Programming Languages

There are plenty to select from, but how would you know which one is right for you. One of the convenient ways to choose the right programming language is by looking at what the market says currently, which technology is trending. 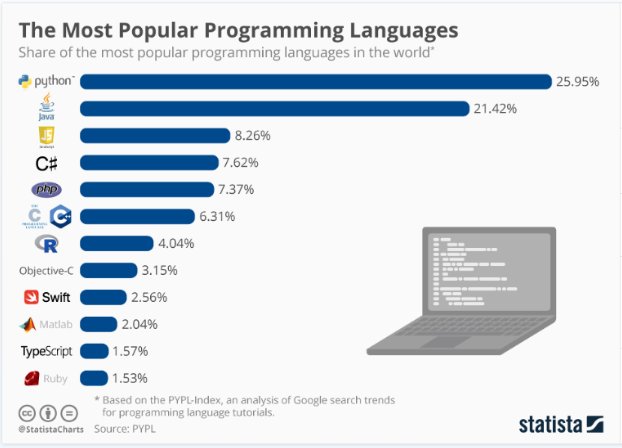 But before going there let's have look on this video:

The first language on the list of Top 10 Programming languages is Python. It is the most in-demand and extensively used language worldwide.

Python provides excellent library support and gives an excellent start for the new programmers. Many companies are using Python as their significant backend stack.

By looking at the immense opportunities for developers in India, a lot of startups are now opting to hire software developers in India. If you are seeking a career in the backend, then learning Python should be your utmost priority.

Java is amongst the top programming languages from the past two decades. It can be defined just in one sentence that would be “write once, run everywhere”. This platform-independent nature of Java makes it unique from other languages.

Java offers you the flexibility to code on any device, compile in machine code, and implement on any platform using Java Virtual Machine (JVM).

It is a robust and object-oriented programming language. If we compare it with C++, it is quite simple as it makes use of automatic memory allocation and garbage collection.

Java builds the foundation for the Android operating system, and nearly 90% of Fortune 500 companies have chosen it to create a lot of various backend applications.

By looking at the high demand of Java and its various business applications, it seems a perfect programming language for all the beginners.

Nowadays, JavaScript has become one of the leading languages, and it seems a bit difficult to become a developer without one. We cannot think of software development without JavaScript as it is the primary language which each programmer must know.

As per the Stack Overflow's 2018 survey, JavaScript has been the most popular programming language subsequently for six years among the developers. And about 65% of them have used it in the previous year.

The programming language is lightweight and plays a significant role in front-end web development. Some of the social media platforms state that JavaScript offers a much easier way to make web pages swiftly.

JavaScript is widely preferred because of its compatible nature with all major browsers and also due to its flexibility with the syntax. Besides, it is also used on the server-side via Node.js.

Next on the list is Swift, it is an open-source, general-purpose language. The language is developed, keeping in mind security, execution, and software design patterns. Swift was developed as an alternative to Objective-C to create iOS applications.

Initially, the language was created to be friendly with beginners as Python and Ruby influence it. Swift is a powerful language that also offers high developer productivity and is gaining much popularity in other domains as well.

There is less coding required, therefore it is much easier for the new programmers to choose Swift. Hence, it made out in this list of top 10 programming languages.

C language was developed in the late 1970s, and it has made a powerful contribution to the programming world. Some of the programming languages are either derived from C or inspired by its syntax, constructs, and patterns. It is the root of some languages such as Java, Objective-C, and C #.

Even today, C remains the most popular option whenever there is a need to develop high-performance applications. There are many applications, including the Linux Operating system created in the C language.

C ++ is the sequel to C. C++ is an object-oriented programming language developed on C. Therefore, it is preferred over others for designing high-level applications.

It is a robust language that provides a structured approach for programming. Both C and C ++ are considered high-performance languages ​​and are extensively used in creating applications where performance is a critical problem.

The main fields of development include virtual reality, gaming, computer graphics etc. However, the practical applications of C ++ have made it to this list.

C-sharp was developed by Microsoft. It is a robust, object-oriented programming language. C-sharp is widely used in developing desktop applications. Windows 8/10 applications are also developed using C#, and it requires the .NET Framework to perform.

Microsoft created the C # programming language as a competitor to Java. Sun does not want Microsoft's intervention to make any kinds of alterations in Java. Hence, it was invented.

C # comes with numerous features that make it quick and straightforward for new programmers to learn it. If we make its comparison to C ++, the code is entirely consistent and logical.

Well, identifying errors is easy in C # as it is a legally typed language, where code is examined before starting the application.

Long story short, it will be much convenient to develop web applications and desktop applications with C#. Additionally, it has also proved itself in VR, 2D, and 3D gaming. Some of the utilities, including Xamarin, have also been written in C-sharp.

PHP is a general-purpose and amongst the most popular backend programming language.

It is a scripting language that runs on a server and is used to create web pages which are written in HTML. It is widely known because it is inexpensive, quite easy to install, and much simple to use for new developers.

Although PHP is facing stiff rivalry from Python and JavaScript, the market still requires a considerable number of PHP developers. For those who want to join a reputed organization as a backend developer must learn PHP programming.

This fact will seriously surprise you, the programming language that was developed to sustain the Personal Home Page (PHP) for Rasmus has occupied about 83% of websites worldwide to date.

PHP is a compelling option for web developers across the world. Additionally, it is extensively being used to make dynamic web page content and images of websites.

R is amongst the most often used programming languages ​​for data analysis and machine learning. It offers a great framework and built-in library for making robust machine learning algorithms.

Moreover, R is used for extensive statistical computing and graphics as well. It is open-source software; therefore, anyone can use and make alterations to it. R is cross-platform and can run seamlessly on various operations systems.

Various enterprises have well embraced this programming language. If you are willing to join the "Analytics" team of any large organization, then you must opt to learn R quickly.

The language was invented in the 1980s and came into use by some early operating systems. The programming language inherits the syntax, primitive types, and flow control statements from C language.

Ruby is a robust language that was created to simplify the programming tasks and make it more enjoyable.

It has gained more achievement by Ruby on Rails, a full-stack web application framework that runs Ruby.

Nowadays, Ruby has emerged as an interpretive, dynamically typed, high-level, general-purpose programming language. It is implemented in C and offers functionalities like garbage collection.

The language targets a lot on developer’s productivity. Although it is not one of the most advertised languages ​​at the moment, it is still a preferred language for the beginners in the development field.

Above, I’ve mentioned the list of the top 10 programming languages ​​you should know. Well, if you want to start your career as a developer, it is only you who have to decide which programming language you want to learn according to your interest. There are many IT Software Consulting firm looking for talented and skilled programmers.

So keeping this in mind, take some time and choose accordingly. More importantly, make sure to place a good command on the language you have chosen.

Tags:
Hubs:
You can’t comment this post because its author is not yet a full member of the community. You will be able to contact the author only after he or she has been invited by someone in the community. Until then, author’s username will be hidden by an alias.
This is the Sandbox — the part of Habr that accumulates all the debut posts of those who want to become full members of the community.